Early June 2007 the Rockies were mired in another season of futility.  Their record was somewhere around 25-30 and they looked to be going no where.  That summer I went to Disney land with my family to celebrate a bunch of graduations inside the family.  My dad just received his Doctorate from Fuller Seminary, my older sister Katie had just graduated from NMSU after seven grueling years with her bachelors degree, and I was just about to graduate from the University of Colorado.  Emmy had just conntinueated (the spelling dictionary doesn’t even know this word), but I don’t think this really counted for anything and I’m still not sure what it really means.  All I know is she was in the 8th grade and she was on summer break before she started High School.  My mom and my Brother-in-law Michael were allowed to come on the trip even though they weren’t graduating from anything.  I guess we let them come because we love them.  Well, anyway we were in Southern California and going to Disneyland as a family for the first time.  This was a not a first for my parents nor was it a first for Michael, but as a 23 year old it was a first time for me.  I don’t think I was to old to go, but I sure wouldn’t have minded being able to ride all of the amazing rides at a younger age too. 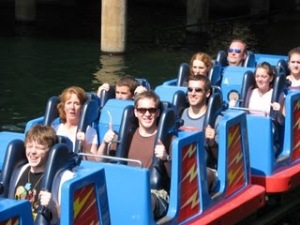 However, this is not about my first magical experience at Disneyland.  This is not about how I sang Yo Ho (A Pirates life for me!) as I floated through the Pirates of the Caribbean ride, nor is it how my mom waived to Barre Rabbit right before we splashed down on Splash Mountain.  This is about my love for the Rockies and how they gave me a little treat this season.
If anyone were to look at the family photos from the trip they would notice me wearing a well worn out Colorado Rockies hat.  During the previous season I started wearing my hat everywhere to show everyone that the Rockies had true fans.  Now remember at this time the Rockies had yet to do anything to garner any respect.  So here we were on our family vacation, me clad in my rockies hat, and my mom asks, “Brendan, why do you still like the Rockies? They aren’t any good.”  I was shocked.  My first thought was of my Grandma who had been a die hard Rockies fan almost her entire elderly life.  She probably would have told my mom to do something crass.  I, however, had a little more grace.  It took me a minute to regain myself.  I didn’t think my mom would ever say something that ridiculous.
Calmly I replied. “Mom, a true fan loves his team no matter what.  I’m not a fare weather fan and I will stick with the Rockies no matter what.”  Little did I know that my faithfulness would be rewarded.  Last season the Rockies swept the Yankees.  How about that, the Yankees.  Any other year for a true Rockies fan like me I would have been able to live on that sweep alone.  But the Rockies didn’t stop there.  As June rolled into July they continued creeping

up the standings.  By Late August they were five games back of the Padres for the west and four games over five hundred.  I think at this point I was really hoping for a winning season, nothing more.  September of 2007 blew me away.  All of a sudden they couldn’t lose.  Every game they had to win they did.  During this stretch I wore my rockies hat very proudly, but I would have still worn it with my head held high even if they hadn’t been on such a great run.  On Friday September 28th I finally went to a game.  The stadium was packed.  Jeff Francis was pitching against Brandon Webb.  And wouldn’t you know my luck the Rockies lost.  The game was hectic, we had runners on in the 7th 8th and  9th but just couldn’t score.  I felt so let down.  I figured the magical season was over.  I was wrong.  The regular season ended with the Rockies in a tie for the Wild Card Spot with the Padres.
What followed next was the greatest game ever played in baseball history.  I know some of you will argue with me on that fact.  But I want you to know this, I’m right and you live in an East Coast centered media bias and need to get your head out of your, um well anyway.  The game was a back and forth battle with the game going into extra innings.  What a thrill ride.  In the top of the 13th the Padres scored twice.  My entire family groaned.  My mom was even there watching with anticipation.  Almost all hope was lost.  How could the Rockies score three runs to win it?  They hadn’t produced any type of scoring threat since the 6th.  But against Trevor Hoffman, the greatest closer the game has ever seen, the Rockies scored three runs.  The last a dramatic head first slide into home plate by Matt Holliday, the real MVP (again East Coast Bias would claim differently).  His chin bleeding he rose in triumph.  I was ecstatic!  The Playoffs!  The Rockies made quick work of the heavily favored Philies and their MVP short stop, who wasn’t even as good as our short stop Tulo (the real rookie of the year), and then they took care of the Diamondbacks to sweep their way into the World Series.
Just a side note on the east coast media bias.  The Rockies had the best deffence ever in baseball history and didn’t win a single gold glove.  How do you figure that?  Popularity contest, maybe?  And what about the fact that Tulo finished near the top ten in MVP voting where E5 Braun who won the rookie of the year didn’t even finish in the top 20 for MVP voting.  Weird, huh?
The World Series was a let down, but I’ll settle for National League Champions any day over missing the playoffs again.  Their ride to the World Series was nothing short of amazing.  They won 21 out of 22 games to get there.  No other team has ever been that hot.  Unfortunately they finished ice cold.  8 days off before the fall classic cooled their bats off.  I still loved every minute of it.  I saved every newspaper article I could.  I’m all about memorabilia, but I was also thinking of my Grandma.  She loved this team more than anyone.  She would have had a crush on Tulo and would have been so happy for Todd Helton.  I cried when they beat the Dbacks to reach the World Series.  I was excited for my team, but also missing my Grandma.  She would have loved this entire experience so much.  I credit her with instilling in me the love of my team.  We used to watch the games together.  Back when the Blake Street Bombers lit up the night.  So I saved every article with her in mind.  Maybe when my mom asked me that ridiculous question back in June of 2007 I should have said I love the Rockies because my Grandma loved the Rockies and I love her.  I think that would be my real reason. 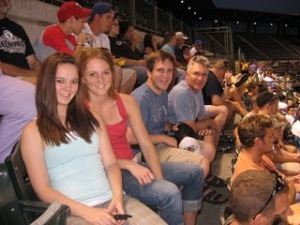 To me watching a Rockies game takes me back to her small apartment.  It takes me back to my youth.  It also reminds me of lazy summer evenings with my dad.  He loves the Rockies too.  But he lets his emotions sway his loyalty a little.   He gets mad at them more than I do.  Watching the Rockies reminds me of the love I have for my family.  It is something we all share.  My little sister Emmy has even started to follow the team!
This brings us to this last Friday night.  I was feeling a little lonely and a little left out.  Most of the guys had gone out of town and I was left behind to sit and read or watch tv.  It is hard being the only new guy who didn’t already know anyone down here.  Friendships don’t just spring out of no where, they take time.  And a month in I am still working hard to form connections with the guys down here.  So instead of feeling lonely and sorry for my self I decided to watch tv.  I was flipping through the channels, most everything was in spanish and so I didn’t know what was being said (I don’t start lessons until next tuesday), but I hit a channel with something familiar on the screen.  A baseball player.  The team that was up to bat was the Padres.  I figured I would watch some baseball even if I didn’t like either teams playing.  Then I remembered that the Rockies were playing the Padres this weekend.  And sure enough Aaron Cook was on the mound for my team, the Rockies!
What a treat.  A little slice of home at a time when I was feeling a little home sick.  I watched the entire game.  I got to see Garrett Atkins blast two home runs out of pitcher friendly Petco Park.  To me this game was as meaningful as game 163 that blasted the Rockies into the postseason and ended the Padres season.  Neither team has been as good this year as they were last year.  The Padres suck and the Rockies have been inconsistent at best.  They have been playing well recently, but they need to do more than that.  I am not sure they will make the runl like they made last year, but I will love it if they do.  Heck I’ll love them if they don’t.  They gave me a treat Friday night when I needed it most.  As I watched the game in spanish I felt at home.  I’m not sure anything else could have comforted me the way watching the Rockies did that night.

Quick update on my life outside of baseball.  The second week of teaching was fun, but by friday I was ready to have a day off.  I am getting more comfortable with my Spanglish.  Yesterday I went on my first hike.  One of the other new teachers who has lived down here for a while took me up above the city.  It was beautiful and just what I needed.  Its hard being a mountain boy living in the middle of a city, even if the city is small and surrounded by mountains.  I am going to try to make sure I go on a hike at least once a week.  Again, thanks for all of the prayers.  I love and miss all of you.
Also you might notice that I’m not wearing my NL champions hat in the last two pictures.  That is because I am superstitious and am trying to make the Rockies win by not wearing my hat.

3 thoughts on “Loving the Rockies!”