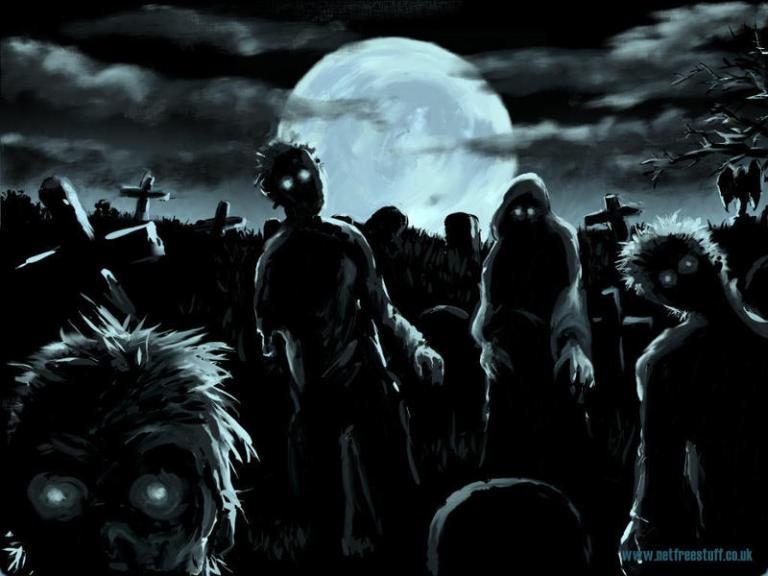 On Easter Sunday we celebrate the most famous case of the dead coming back to life.  You heard me right, celebrate.  I know many of you about to run away from your computer screens to grab your shotguns or katanas, but wait.  Hold up.

Have you ever had the fear that the living dead will come breaking through your door?  I’m talking about rotten decaying humans that hunger for your brains.

Many ancient societies held to the fear that the dead would come back to life and run rampant across the land.  Why else do we still bolt our coffins shut from the inside or why did the ancient Irish place a stone in the mouths of the dead.  Both are precautions against the dead returning to life; one locks the dead in a coffin and the other fills the mouth so that the dead is prevented from eating.

There are many other examples that prove that our world lives in fear of the death and  the dead.  Like the rules of cleanliness in ancient Israel, if a person touched a dead body there were considered unclean.  Maybe they were trying to prevent the spread of diseases or maybe they thought if someone interacted with the dead they would become a Zombie.

The technical definition of a Zombie is any dead body given the semblance of life, but mute and will-less by a supernatural force, usually for some evil purpose like eating brains.  In Harry Potter they are called Inferi and are used by dark wizards to attack the living. Even magical people fear the living dead.  Any Zombie has no will of his or her own, save to consume brains and make more Zombies.

Real Zombies, whether you believe in them or not, exist to suck life and meaning from their prey.  Zombies live, well not really live, with an unquenchable desire to feed.  Much like the American consumer, Zombies are always wanting more and what they leave in their path is death and destruction.

A Zombie’s main desire (If a Zombie has the free will to have his or her own desire) is to turn normal people into Zombies and once you have been turned into a Zombie you are condemned to a living death.  Imagine working in Dilbert’s cubicle for the rest of your life, bent on just amassing more; a “life” doomed to utter meaningless.  Just imagine living your life and your only desire is to eat brains;  human brains at that.

And now to the upcoming celebration of the most famous case of resurrection.  That’s right, I’m talking about Easter Sunday!

That’s right, Jesus Christ came back from the dead and in two weeks we’ll celebrate his resurrection.

Fortunately Jesus Christ is the Anti-Zombie!  Jesus, who called himself, “The Good Shepherd,” who was willing to die for his, “sheep,”  knew he had to die so that we would be protected from a meaningless life.  In the Gospel of John Jesus says, “I have come that [you] may have life and have it to the full.”  Jesus did not come so that we would live our lives in mediocrity.  No he came to break us away from meaninglessness.  His life gave us a purpose, which I believe is to love and serve one another with a confidence that we are protected from the sting of death.

Jesus died so that “whoever believes in him shall not parish, but have eternal life.”  Anyone can die, but Jesus came back to life.  However, unlike Zombies who are the reanimated dead bent on destruction.  Jesus’ resurrection is, in essence, an act against a meaningless life.

As J.K. Rowling says in Harry Potter and The Deathly Hollows, “The last enemy that shall be destroyed is death.”  Rowling cleverly pulls this quote from 1st Corinthians chapter 15 verse 26.  She is making the point that death, and in my opinion, meaninglessness are enemies to be destroyed.  And fortunately for all of us Jesus has conquered these enemies.

Paul, the author of 1st Corinthians, believed that Christ’s resurrection was a resurrection to a spiritual life and that death has no sting or power.  That whoever allows Christ to work in their life will be changed in life and through death.  Their body might die, but their soul will live on in Heaven.

So Jesus’s death and resurrection give a meaning to life.  Where Zombies are reanimated to consume, Jesus died and came back to give us the freedom to live.  That is part of the practice of the Communion at church.  Believers take in Jesus’s body and blood and are given a full life; one that is satisfied by Jesus and not material goods.  We, normal humans, who don’t go around eating brains, no longer need to be afraid of Zombies, of meaninglessness, or death, because Jesus died and came back to life for us, so that we could live our lives to the full.

And now the Zombie Commandments: Some of Jesus’ commandments with a Zombie flavoring.

2. Love your neighbor as yourself because his brain tastes as good as yours.

3. You are the salt of the earth, so add extra humans on any brains you might eat.

4. You have heard it said, “Do not commit adultery.”  But I tell you that anyone who looks at a woman lustfully and does not eat  her brain has already lost out on a chance for a good meal.

5. You have heard it said, “an eye for an eye and a tooth for a tooth,” but I tell you do not resist anyone that wants to eat your brain.

6. And if someone wants to sue you and take your tunic, let him have your brain as well.

7. Give to anyone your brain if they ask for it, and do not turn away anyone who utters the phrase, “Must Eat Brain!”

8. You have heard it said, “Love your neighbor and hate your enemy,” but I tell you to love your enemy and pray for those who try to eat your brains.

9. Thou Shalt covet they neighbors brain.

Celebrate Holy Week by living like the anti-zombie, Jesus, and living in the freedom from a meaningless life.